The boys continue their workout by plowing an entire field with their hands. After a quick breakfast, they head over to a construction site. Here, they dig holes and haul equipment. Their speed dazzles the foreman. They eat lunch and then take a nap. Goku is getting impatient, and wants to learn fighting moves, but Master Roshi says he won’t teach them fighting moves until their bodies are in the proper condition. Their next task is to swim ten laps on a lake while they’re being chased by sharks. Then Master Roshi ties them to a tree and makes them dodge angry bees. At the end of the day’s training, Master Roshi tells them they will be doing the same thing every day for the next eight months, but with 50 lb. turtle shells on their backs. 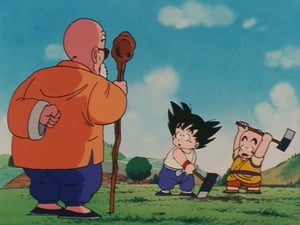