Will it Appear! The Power From the Training

The preliminary rounds are divided into four sections, with the top two from each section going on to the finals. Goku and Krillin are drawn into the same section, but are on opposite ends, so they won’t have to fight each other. Goku’s first match is against a giant, but he is able to knock him out of the ring with only a slight tap to the leg. Krillin’s first opponent is an enemy from his old martial arts school. He kicks his opponent so hard that he breaks a hole in the wall. Bulma, Oolong, and Puar are able to watch the matches through this hole. At the end of the day, Goku, Krillin, and Yamcha all advance to the final round of the World Martial Arts Tournament. 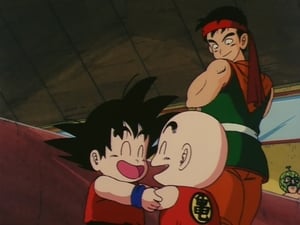